I recently took a hike with my son and as we came out of the woods into a wetlands area overlooking a large pond, a wooden deck with a railing came into view. A few steps brought one up to the platform which hosted a pleasant picture of the marsh above the aquatic grass tops. On the deck we observed a gray haired man standing next to a slightly younger, female counter-part. They were both holding lap dogs in their arms, as a mother would hold a child up to a water-faucet, only they were obviously perched so as to be able to enjoy the view. As the couple stood there, talking to their pets, I couldn’t suppress a chuckle, as I recalled a lesson from C.S. Lewis. 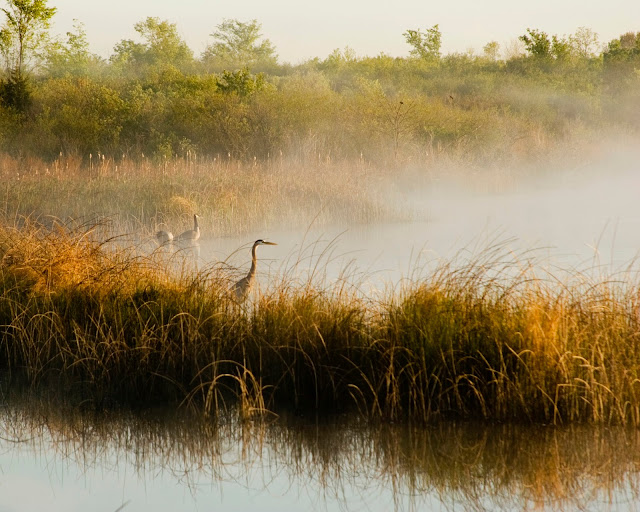 “Are You My Mother?”
Lewis begins the Abolition of Man with the story of “Coleridge at the Waterfall” in which there are two men, one who admires the waterfall and calls it ‘sublime’; the other who calls it ‘pretty’. One of Lewis’ points is that modern man thinks these are statements of feeling, when they are actually statements of value. The first man says, “This is sublime” because he is making a judgement about the waterfall. His feelings of awe and humility are in response to something intrinsically, profoundly beautiful in the waterfall. The other man is heedless of the waterfall and misses the opportunity to respond reasonably to the falls.

My observation here is that it takes a human to recognize the goodness and beauty of a sublime landscape. Our pets, I am sorry to say, cannot do it. Contemplating an exquisite masterpiece is the work of the intellect - a gift God gave to humans and angels alone.  It is not in the nature of animals to make a universal, abstract judgement like this. The rational human soul is able to recognize universal goodness. A dog’s soul cannot. Thus, we are faced with the absurdity of the aquatic scene, wherein the owners of the pets assume their animal friends are gifted with capacities they do not possess.

The behavior of the couple by the pond may be an innocent projection of their own human nature onto their canine companions but we see a lot of projection these days and a general confusion about the nature of all creatures, not just animals. Some confused modern thinkers, for example, treat people like computers, computers like people, and themselves like gods. Others believe they are mere animals or embodied angels.

The first story of Genesis tells us that God created the universe according to His intelligent design. He established it in order with boundaries and limits, says Psalm 148, which cannot be passed. The six day creation account teaches us about the inner nature, the value, and the ordering of the whole of creation. God separates light from darkness, water from land, plants from animals, and animals from humans.

“And God saw that it was good.” Augustine reminds us that there is nothing that exists, material or spiritual, that was not created by God and everything is held in existence by the Creator. (Augustine, On Genesis) God's visible, material creatures are endowed with stability and truth according to the order that governs them. In its own particular way, each creature reflects a ray of God’s infinite wisdom, perfect design, and goodness. Because of this goodness, man – made in God’s image and likeness with a rational, spiritual nature and set apart for the task of dominion over the earth (Gen 1:26-29) – ought to respect and steward all of creation according to God’s order and purpose.

In plain English this means, man must neither selfishly exploit nor devalue the goods of creation nor promote the orders of nature beyond their particular values. The disordered use of creation causes serious problems for humans and their environment.

God’s Word reveals an ascending scale of value in the order of creation itself. It is expressed in the six days of creation, the order of things being created from less perfect nature to more perfect. God loves all of His creatures. “His compassion is over all He Has made.” (Psalm 145:9) Yet, men and women are clearly the summit of God’s creation. Jesus confirmed the hierarchy of man over animals when He said, “Of how much more value is a man than a sheep!” (Matt. 12:12) And also, “you are of more value than many sparrows.” (Luke 12:7)

God’s Created Hierarchy in Nature: We Are not Equal to God or Plants

The hierarchy of nature was expressed in our Western tradition most clearly by the Greek philosopher, Aristotle (384-322 B.C.), and his medieval student, Thomas Aquinas (1225-1274 A.D.), a Dominican friar and ‘Doctor of the Church’. Their understanding of nature is not exhaustive, but, their combined metaphysics is the most coherent study of the order of being in the Western tradition. Even a Western atheist should not ignore it.  As Christopher Dawson (1889-1970 A.D.), the great philosopher of history at Yale claimed - if you do not understand your own tradition first, you can never pretend to understand any other tradition.

The hierarchy of creation (see chart), in ascending order, is: minerals, plants, animals, humans, angels, and God. That is fairly straight-forward, as is the fact that the nature of minerals, plants, and animals is material and the nature of God and angels is spiritual. Man is more complex because he alone of all creation is both material and spiritual in his nature. We will look at humans another time. For now, let’s look at the powers (scope of functions) God gave to plants and animals because that will help us understand the differing values within the various orders of creation.

Aristotle and Aquinas recognized that all living bodies (i.e. plants, animals, and humans) have a soul. A soul is the part of a living creature which gives it the capacity to engage in the activities proper to that living organism, according to God’s design. The souls of plants and animals are material souls, not spiritual souls. Only the human soul is spiritual. (Angels don’t have souls because they don’t have bodies). Spiritual beings are rational, which is to say they act with intelligence and free choice.

PRINCIPLE: PLANT (AND ANIMAL) SOULS ARE MATERIAL,
NOT SPIRITUAL, AND THEREFORE NOT RATIONAL

(The animal soul and the human soul also have vegetative powers which give them the capacity to use food and water, grow, and reproduce according to God’s design.)

For example, if a dog apprehends that eating steak gives him pleasure, he will store an image of steak in his memory and use his external senses (smell, sight, etc.) to discover more steak in the future. Instincts are proper to the estimating power and allow an animal to apprehend intentions that are not perceived with the external senses. A sheep runs away from a wolf, not because of its color or shape but because instinct ‘tells’ the sheep it is in danger of being eaten. Likewise, a bird gathers straw for a nest, not because it finds the straw pleasant but because instinct instructs the bird that this is good building material. In other words, instinct informs the animal whether something is harmful or useful. Animals (and humans) also have appetitive powers (also called desires, feelings, emotions and passions), but we will look at those later.

In addition to these vegetative and animal powers, man’s soul has rational powers. This is to say that, just as animal souls enjoy the vegetative and sensitive powers, man enjoys all three. The powers of intellect and free-will are spiritual powers and belong to the human soul alone. The intellect and will enable the soul to reason and to know and love God and other persons. Angels are also persons, with an intellect and will, but angels do not have a soul because they are pure spirit. The soul, by definition, is the vitalizing principle which enables a plant, animal, or human to perform the activities which we associate with being alive.

“Where are you going with all this?” you might ask.

The whole point of going through the hierarchy of creation is to lay a foundation for further sections. The big take away is this: God created plants for a purpose. We honor that purpose by honoring their nature. It does us no good to add or subtract from the value God gave to plants. This kind of adding and subtracting leads to problems that I will try to illuminate in further discussions. For now, be at peace in the wisdom of God’s design for plants and animals. The reality is far more interesting than the half-truths and illusions.

Christopher B. Warner
Christopher is a teacher, mentor, and freelance writer living in Michigan. He is a life long student of the humanities with a concentration in Theology. Warner is a graduate of Franciscan University of Steubenville (1998) and the Antiochian House of Studies (2014). Marine Corps officer and veteran (2004-2007), he writes about the principles and virtues that lead to human flourishing. Christopher's editorials, interviews, and essays have been published in Catholic World Report, National Catholic Register, Free Republic, Orthodoxy Today, Sophia, RISU, and First Things.